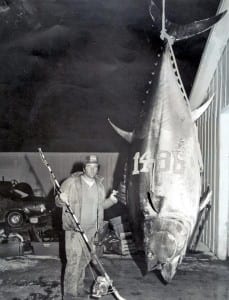 Sport fishing for tuna began in Nova Scotia in 1935 when Michael Lerner and his fishing guide Captain Tommy Gilford successfully landed five bluefin by rod and reel. The two had heard about the abundance of tuna in the waters around Wedgeport. Wedgeport became the Sport Tuna Fishing Capital of the World and attracted famous visitors including Babe Ruth, President Franklin D. Roosevelt and Ernest Hemmingway.

The world record for bluefin fune was caught in 1979 by Ken Fraser off Auld’s Cove Nova Scotia. The fish weighted a massive 1,496 lbs and was over 10.5’ in length.

The longest contest between man and bluefin occurred off Liverpool Nova Scotia in 1934 when six men taking turns fought a 796lbs tuna for sixty-two hours.