In his journey of over forty years through the art world,
Sandy Fairbairn continues resolutely on the margins and in the ditch. The photographs in his exhibition titled, ‘CURB APPEAL : THE GARDEN CITY.’ capture some of the architectural aspects of St. Catharines that he finds most appealing.

Describing his artistic vision and process he says,
“I’ve been to Europe and Paris too, but I’ve never bothered taking a picture of Notre Dame, eh? I like that stuff on Geneva Street way better. I spent five years at art school and I learned a whole lot. I just can’t remember exactly what it was.” 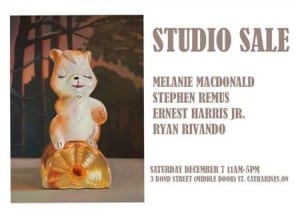