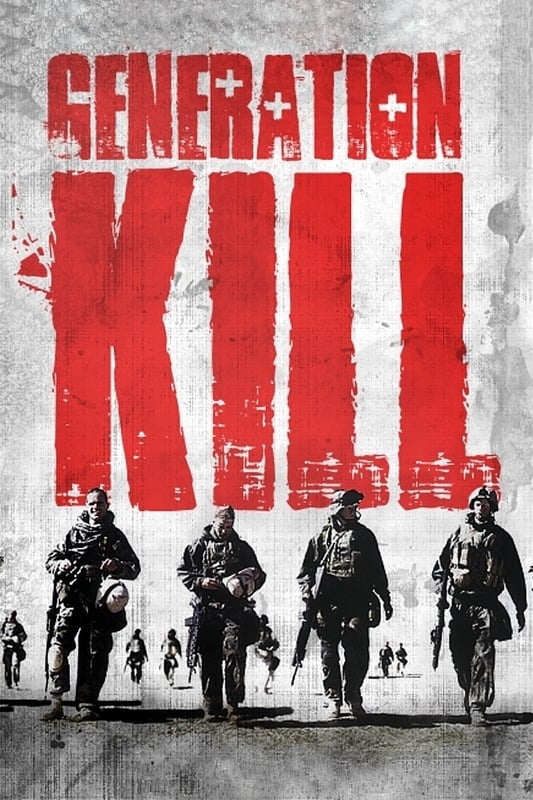 GENERATION KILL (All of it)
Saturday 28 January
From 1PM until 8:30PM
Microcinema at the Niagara Artists Centre

And I looked, and behold, a white horse / And his name that sat on him was death / And Hell followed with him
– Revelations 6:8 / Johnny Cash

As the National Football League approaches its annual climax and presents us once again with the moral riddle of a car crash that we can’t help gawking at… And now that it’s finally ‘game-on’ for World War III with a united West facing off against an aligned Russia and China, could it be time to reflect on militainment in one of its more compelling iterations? For this purpose NAC proposes watching the fifteen year-old, seven-and-a-half hour mini-series Generation Kill in a single sitting in the unrivalled comfort of our microcinema.

Produced in seven-parts, Gen Kill was based on the 2004 book by Rolling Stone reporter Evan Wright’s experiences embedded with the US Marine Corps’ 1st Reconnaissance Battalion during Operation Iraqi Freedom (the one that was on the hunt for those ghostly Weapons of Mass Destruction). The book was adapted by Ed Burns and David Simon (The Wire and Treme) and directed by Susanna White and Simon Cellan Jones. It was aimed at faithfully adapting the events as they were narrated in Wright’s book and it recruited Marines who had served in Iraq to ‘act’ as themselves. Whether the series succeeded in its aims to deconstruct media representations, reject soap tropes, and present a more authentic telling is debatable. For all Gen Kill’s ambiguity, Marines often praise it as a ‘true’ depiction — it did have a premiere screening at Camp Pendleton recalling that scene in Jarhead where Marines erupt in exhilaration watching the Ride of Valkyries scene in Apocalypse Now.

As Super Bowl and the anniversary of the full-scale Russian invasion of Ukraine loom — separated by mere days and likely to march in historical step for years to come — let’s extend the spurious reasoning that defines our days and consider the conflicts that bring us all together, the ones we all watch at the same time. Heck, this upcoming mid-February moment will likely promote the kind of collective focus that we rarely get to be a part of anymore, vestiges of a simpler time when we wore T-shirts that asked, ‘Who Shot JR?’.

NAC wants you to be fully prepared for what’s to come by offering you a rare opportunity to take in all seven plus hours of the entertainment industry’s attempt to break down just what happened during one of the last great spectacles of conflict to flash across our screens.