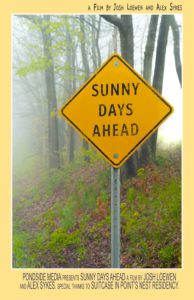 It’s the end of highschool and best buds Walt and Pete are making a movie all about Walt’s life. It’s our pure joy, and pure fear of what the future could hold, through the eyes of a couple 12th graders with video cameras staring into their post graduation abyss. They explore a variety of genres from stop motion to western to try and figure out their futures. Also there’s a giraffe.

Filmmakers Alex Sykes and Josh Loewen, grew up in Niagara and continue to find inspiration in the forests and waters of the region. Niagara is an essential part of our work, it’s where we have grown as artists and we believe our work currently and in the future will always reflect that.

Sunny Days Ahead is presented in program with:

Two friends with a working rabbit’s foot witness a mob murder. The film was shot locally in St. Catharines, Stevensville and Welland, with cast and crew from across Niagara.

Video Home System traces the convergence of popular culture and politics in Pakistan during the 1980s and 1990s. This video showcases the connections between pop culture and nationalism, and how bootleg economies kept the cinema industry alive during periods of censorship.

Sunshine Express, a local vaporwave and rock n roll band, have to sell a lot of tickets for their upcoming show at the big time Rock Show Club. No problem, right? Well, yes. Yes problem: the band has no fans, no money, and no clout–not even a single view on YouTube! Will the power of Posse be enough to pull the boys through? (Chapter 1 of a feature-length anthology series)