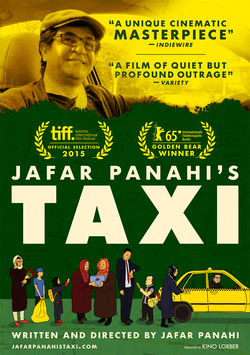 Persian Cinema Nights are curated by NAC Member Sahar Saeidi. Sahar is a poet and guest film programmer, showcasing a taste of Iranian Film’s greatest hits. Sahar was born in the UAE and arrived in Canada in 2004.

Banned from making movies by the Iranian government, Jafar Panahi poses as a taxi driver and makes a movie about social challenges in Iran.

In 2010, Jafar Panahi was banned by the Iranian regime from making movies for 20 years. Roxborough writes that “the director has always found a way, shooting his films in secret, and often appearing in front of the camera in lightly-fictionalized versions of his real life” – Hollywood Reporter, 2022