In speaking of the group’s pageant muse in a 2011 article for The Toronto Standard, Derek McCormack writes, “Miss General Idea was a figure as real as any beauty queen-that is, not real at all. Through her, the artists in General Idea were able to plunge themselves into an aspect of stardom that they loved and loathed: glamour. They designed dresses for her, and a boudoir. They drew up plans for a pavilion that would be built in her honour. They staged pageants in which men and women would win her title, at least for a time.”

AA Bronson as MC with the three finalists of the 1971 Miss General Idea pageant at The Art Gallery of Ontario. Image courtesy of e-flux.com

The group staged the first Miss General Idea pageant at the Art Gallery of Ontario in 1971. Sixteen pre-selected artists across Canada were sent “Entry Kits” and among the contents of each was a brown, retro dress from the 1940s, called The Miss General Idea Gown. Contestants were to take a series of eight photographs of themselves modelling the gown and then send their entries back in the box provided. Of these entries, one photograph from each artist was blown up and hung in an exhibition at A Space the week prior to the pageant. Judges were invited to see the photographs and select three finalists, the winner to be announced at the pageant. In what was a highly choreographed, highly glamorized performance at the AGO on October 1, 1971, complete with a red carpet, search lights, flashbulbs, limousines, and musical performances, Marcel Dot was given the title of Miss General Idea for his submission.

In 1975 “construction” started on the 1984 Miss General Idea Pavilion–a 1984-seat pavilion to be “built” in honour of its namesake with the purpose of holding future Miss General Idea pageants. The pavilion was, of course, never actually built but rather existed through ephemera including proposals, depictions of logos, and even detailed descriptions of the construction workers at the building site. There were also architectural components like the jigsaw puzzle hoarding that surrounded the fictitious site, and the “massing models” made of Venetian blinds fashioned into pyramid shapes that did double duty as gowns. In his essay on a 2009 exhibition of the ephemera surrounding the 1984 Miss General Idea Pavilion that took place at York University, Jon Davies writes, “these architectural evening dresses allowed GI to reflect on the experience of “being an object”: “walking, talking, living, breathing ideas with legs,” with the shoes acting as pedestals, naturellement.” 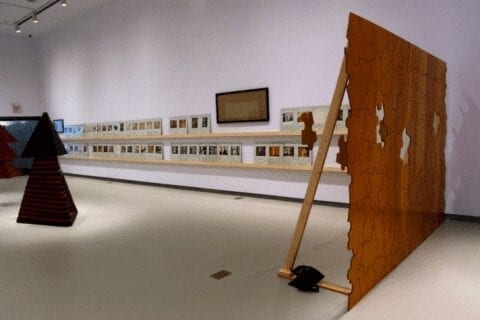 The group continued using Miss General Idea as an artistic muse until about 1984 when their work began to focus almost exclusively on AIDS, which would sadly claim the lives of both Felix and Jorge ten years later.

As I was researching Miss General Idea more closely, what struck me was how GI’s elaborate performances (in particular the 1971 pageant), have so much in common with STRUTT–the zaniness, the performative aspect, the colourful local community coming together. A passage on the AGO’s website about Haute Culture (a retrospective exhibition of the work of GI that toured to the AGO in 2011), offers this perspective on the persistence of the collective’s work in the Canadian cultural landscape: “The group’s keen understanding of how wit and irony can be used to create powerful cultural critique ensures their work remains relevant today.” Interestingly, NAC built its reputation on the same artistic device starting in 1969, and after a lull in membership in the late nineties, it was only when the qualities of humour and irony were restored to the centre’s programming via community-based group shows like STRUTT in 2001, that NAC continued to enjoy success as a regional artist-run-centre. (Read more about that here). While STRUTT is indeed a showcase for the talent of local artists, McCormack could easily be describing NAC’s art-come-fashion spectacular in his following observation of General Idea: “General Idea produced glamour in order to parody it; the artists inhabited the world of fashion in order to fuck with fashion.”