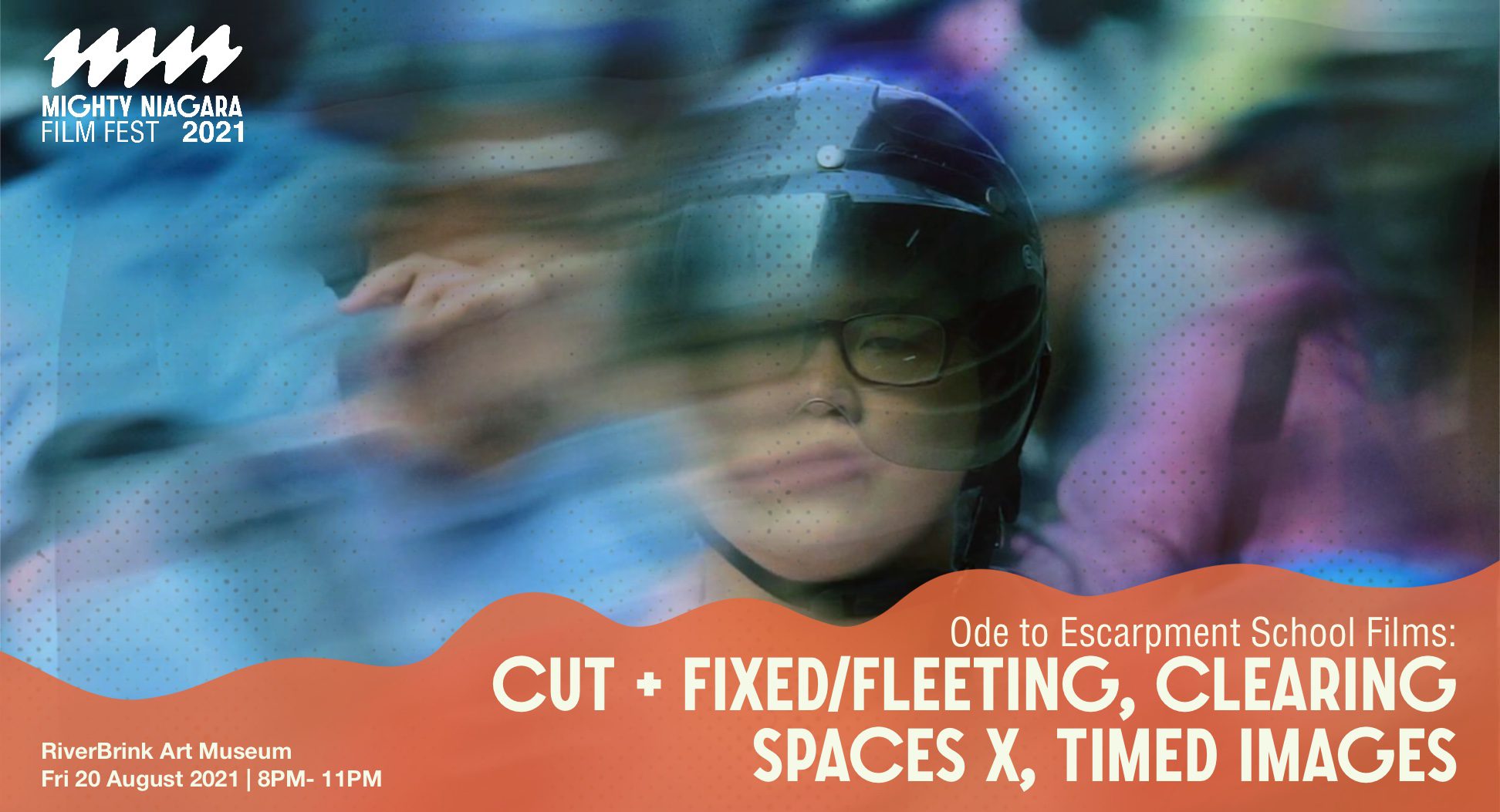 The Mighty Niagara Film Fest presents the inaugural Escapement School Film Program, an ode to the films and filmmakers of Escarpment School collective of the 1970’s. Named after the Niagara Escarpment, the Ontario filmmakers collective experimented with ethereal imagery, poetic themes, and collage style documentary filmmaking.

Based on Hito Steyerl’s bracing 2009 essay of the same name, Cut looks at how cinema and the assembly line both cut the body in new ways, organizing newly urban work forces. A dreamy collage essay made of scraps and fragments, with asides from Susan Sontag on Disney fascism, and Paul B. Preciado on the cost of living in a body.

Mike Hoolboom began making movies in 1980. Making as practice, a daily application. Ongoing remixology. Since 2000 there has been a steady drip of found footage bio docs. The animating question of community: how can I help you? Interviews with media artists for 3 decades. Monographs and books, written, edited, co-edited. Local ecologies. Volunteerism. Opening the door.

Cut is presented in program with:

Filmmaker Julianna D’Intino captures her grandmother’s experience immigrating to Canada through Ellis Island in the 1940s, contrasted with the artist’s inaugural encounter of the July 4th Holiday while living in America.

Julianna D’Intino is an Italian-Canadian Artist and Filmmaker, born and raised in Niagara. She makes work about finding and creating home, about longing and belonging and finding or making a place in the world. She holds a Bachelor of Fine Arts from Parsons School of Design.

A psycho-fertile thriller uncovers the healing and harrowing journey of birth and loss.

This experimental film follows two spirits in red, who guide us through the seemingly impossible suffering and joy of the fertility experience. An elemental narrative unfolds, marrying the pregnant female body with the fertile ground. Dancing between documentary footage and poetic performance, the Broadbent Sisters give life to the untold story of miscarriage and birth.

The Broadbent Sisters, Joy and Rose Broadbent, grew up in St.Catharines and are now based in Toronto. The lush dreamy nature and landscapes of the Niagara region helped form their connection to elemental imagery in their current films and artwork.

Timed Images was one of two works of public art in St. Catharines, by Canadian musician, filmmaker and artist Michael Snow. In 1972, Brock University engaged Canadian architect Raymond Moriyama to design and build a large new academic complex. Moriyama invited Snow to collaborate with him in the building. Snow’s part was an immersive multimedia installation, embedded in the new architecture.

Only fragments of Timed Images exist today in their original location. The Photo Mural is intact.

This documentary is an intimate exploration of the artwork from its fragments – an attempt to reveal what was behind the two works by searching through Snow’s own publicly available notes, letters to the Moriyama firm, as well as photos then and now by him and at Brock. Artistic animations in the video hope to evoke his process and technical aspects of the installation. The makers of this video believe that letting ‘what was’ work in the imagination, can be as satisfying as once experienced by an unsuspecting but delighted University population in 1972.

Lesley Bell, featured in the film, is an artist and former professional support staff for the Department of Visual Arts at the Marilyn I. Walker School of Fine and Performing Arts. She also managed the University’s Fine Art Collection since 1999. This oversight drew her into the pursuit of trying to understand, and then to appreciate this important work by Michael Snow in the midst of St. Catharines.

Tracy Van Oosten is an artist and filmmaker working with text, video, installation and the Internet. Using the moving-image within immersive contexts, her research focus is the affective relationship between bodies and mediums, both as conduits and networks, embodied and entangled, hosting the currents and maelstroms of feeling. Tracy received her MFA from Concordia University and works as a part-time instructor at Brock University. Her work has been exhibited nationally and screened at festivals internationally.