Your Face Arrived by Mike Hoolboom > Friday Night at NAC

On Friday 4 April at 8pm at the Niagara Artists Centre we’re having a screening of Mike Hoolboom’s award winning movie Tom to launch his exhibition Your Face Arrived. This one-time screening will be accompanied by popcorn and local luminaries. The artist will be present to receive jokes, chitchat, and answer questions. Won’t you come by?

A few words about the movie Tom by Mike Hoolboom.

“A dazzling experimental documentary about notorious cineaste Tom Chomont. With this extraordinary portrait, Hoolboom creates a different kind of biography film, one that eschews traditional realism in order to depict the reminiscences of a fading life lived in the throes of image culture.”
– Diane Burgess, Vancouver International Film Festival

“A magical, hauntingly allusive collage, a celebration of a sexual and artistic outlaw, mixing found footage from across a century of American history.”
– London International Festival

“If, God forbid, P. Diddy ever made a movie about one of his heroes, the concept would probably sound a lot like Hoolboom’s Tom, a dazzling experimental picture that pays tribute to underground artist and filmmaker Tom Chomont. Like his Puffiness, Hoolboom doesn’t actually pick up his camera and shoot any new film-he instead appropriates chunks from Chomont’s extraordinarily large catalogue, and unlike Puffy, turns it into something new and exciting, and spellbinding. It’s the kind of film that grabs you, sucks you in, and practically hypnotizes you as your jaw gets closer and closer to your lap.”
– City Newspaper, Rochester 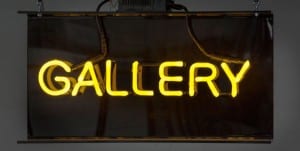 Three yellow neon signs that read the word “GALLERY” originally produced for a site-specific project organized by the Blackwood Gallery in 2013, are travelling to the Niagara Artist’s Centre from 4 April to 26 July 2014.  Placed in NAC’s street level front window gallery in close-proximity of one another, these neons mimic commercial publicity signage and humorously exaggerate this overlooked area to create a superfluous gallery space.

Nathalie Quagliotto (B. Montreal, Quebec) is a Toronto based conceptual artist who uses humour and disruptive situations to comment on the criticality of the art environment. She earned her MFA in sculpture from the University of Waterloo in 2009 and her BFA in studio from Concordia University in 2007. In 2008 she apprenticed under Turner Prize winning conceptual artist Martin Creed in London, England, thanks to the University of Waterloo’s Keith and Winifred Shantz fellowship. She has shown nationally and internationally and her work is in various private and public collections in North America, such as the Urban Institute for Contemporary Arts in Michigan. She is a grant recipient from the Toronto Arts Council as well as the Ontario Arts Council of Canada. She has recently shown at the Museum of Design Atlanta, Georgia, as part of the “XYZ: Alternative Voices in Game Design” new media exhibition.  She has upcoming exhibitions across Canada and in New York in the States.